Version 2.23 of OneDriveMapper has been released.

If you assign licenses in Office 365, you’re essentially assigning license bundles. Each license usually consists of several sublicenses, like this:

In a case I ran into for a customer, the ‘Exchange Online’ component was sometimes not enabled for certain users. It took us  a while to notice that the serviceplan of the main license had been unchecked. In Powershell, it would normally look like this: 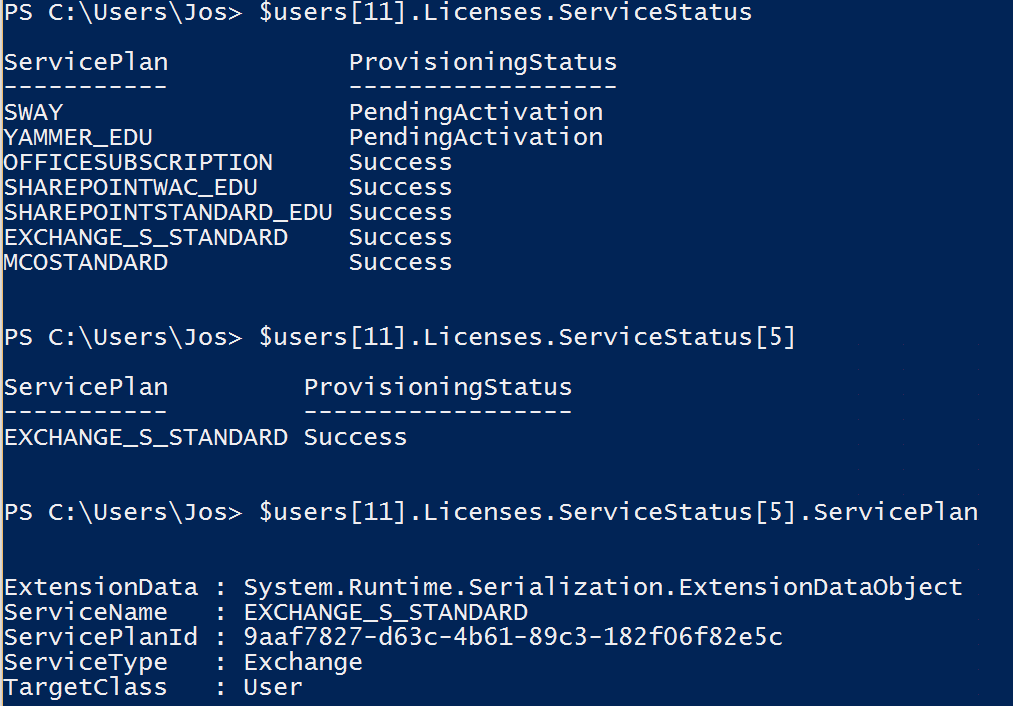 Of course now we’d like to know which of our thousands of users did not have a EXCHANGE _S_STANDARD ServicePlan with a ProvisioningStatus of “Success”  after the migration to Office 365.

So, I wrote the following Powershell snippet END_OF_DOCUMENT_TOKEN_TO_BE_REPLACED

This is another nice step forward into making this product more mature, hopefully in the future we’ll be able to use Intune auto enrollment to manage anything, anywhere, anytime. Until now, managing roaming laptops with Intune was basically useless if you wanted to deploy any type of software outside of the Windows Store.

Some gotcha’s with this improvement:

If you want to use the Sharepoint Online Management Shell module for Powershell to view user permissions on your Sharepoint Online site, start a Powershell window as admin. If you’re not running as admin you’ll have to add the module path to your environment variable like this:

Then load the SPO module:

And connect to your sharepoint tenant: END_OF_DOCUMENT_TOKEN_TO_BE_REPLACED

In organisations that have moved to Office 365, or are moving to Office 365 while using a hybrid setup with an on-premises Exchange 2010, 2013 or 2016 server and/or Lync/Skype, your helpdesk tools and scripts need to be adjusted.

While previously, you would provision your account in Active Directory, the mailbox on the onpremises Exchange Server and voip functionality on the Lync/Skype server, after your migration, you no longer need to provision mailboxes or lync accounts on premises. After a user has been migrated to Office 365, his ‘user type’ in the Exchange on premises server is ‘Remote Mailbox’. But for new users, this is not set automatically.

If you’re using scripting or tools like ADManager, you can use some simple Powershell commands to set the correct properties on a newly created user.

Configure and run below script END_OF_DOCUMENT_TOKEN_TO_BE_REPLACED